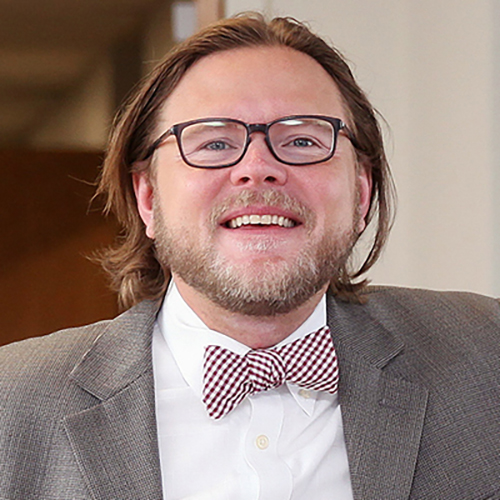 Dr. Jur leads the Nano-EXtended Textiles (NEXT) research team, which aims to leverage nanotechnology materials and processing methods in to impart new characteristics to polymer films and fibers, with a specific focus on electronic and electro-optical modifications. Such an investigation requires a engineering design philosophy to be applied toward the ‘system-level’ development of the textiles and electronics to advance our technologies beyond the lab. Of particular interest to the NEXT team is the design of ‘smart’ textile platforms (wearable,internet of things) that enable improved materials integration of sensors, energy harvesting, energy storage, and communication devices.

Click here for more information on the NEXT research group.

The Center for Dielectrics and Piezoelectrics (CDP) is an internationally recognized research center dedicated to improving the science and technology of dielectric and piezoelectric materials and their integration into components and devices. This class of materials underpins the functionality of a broad array of electronic and electromechanical systems that are enabling for the transportation, energy, aerospace and defense, communications, and medical sectors of the economy. In response to the needs and opportunities for academic-focused research to support these technology areas, the CDP was established in 2013 as a joint center between North Carolina State University (NCSU) and The Pennsylvania State University (PSU) and became an official NSF I/UCRC in 2014. The center attracts companies across the supply chain from raw materials suppliers, to component/subsystems manufacturers, to test equipment suppliers, to device and systems integrators.

This work will seek to define the current status and assist in the evolving status of automation in the textile industry in the United states, relevant for the US Military functions.

The overarching goal of this research project is to explore the fundamental principles of electronics integration in wearable platforms, while at the same time transitioning these strategies toward the development of the ASSIST defined testbeds. A key differentiator of the ASSIST NERC to commercially developed platforms (wristbands, chest straps) is the ability to make novel integrated wearable systems on textile platforms. E-Textiles is considered a truly disruptive technology that will begin to establish itself in major applications in the near future. Through our efforts with ASSIST, the PIÃƒÂ¢Ã¢â€šÂ¬Ã¢â€žÂ¢s research team in textile engineering has been leading the effort in design of electronics/sensors integration in textiles and the development of novel electronics platforms that enables the evaluation of on-body energy harvesting. These textile-based platforms will serve as a basis for an open-source/open-integration system to promote academic and industrial advances in wearable energy harvesting (Thrust 1), sensors (Thrust 3), communications (Thrust 4), and low power electronics (Thrust 4). This research not only supports the current testbed generations, but serves as launch points for the development of future testbed generations and possible new testbeds definitions. In this current year projects, we aim to focus on 3 separate research projects, 1 undergraduate engineering project, and 1 course development project ÃƒÂ¢Ã¢â€šÂ¬Ã¢â‚¬Å“ 1) Durable e-Textiles Sensors for the Human Microclimate: Based on our prior effort for durable, electrically conductive traces on textiles, methods for ink printing and atomic layer deposition patterning will be incorporated studied for biochemical and thermal sensing directly in the textile. 2) Materials evaluation for the body ÃƒÂ¢Ã¢â€šÂ¬Ã‹Å“energy mapÃƒÂ¢Ã¢â€šÂ¬Ã¢â€žÂ¢: The Energy Harvesting Subsystem, developed in Yr 3, will be used for to evaluate textile-inspired heat spreader and heat sink designs using nanoscale materials techniques in ink printing and atomic layer deposition. Human trial studies will be performed for evaluation of ASSIST devices and the materials developed. 3) Isotropic ALD-modified CNT mesoscale structures for thermal and moisture management: Thermal management opportunities exist in the through the use of mesoscale structures of nanoscale materials, such as aligned CNTs foams. This effort, in conjunction with Philip Bradford in Textile Engineering, Chemistry and Science at NCSU, will study the isotropic thermal and capillary wicking ability of aligned CNT foams with ALD modified surfaces that enables control of thermal conductivity, thermal insulation properties, and liquid surface tension. 4) TECS/ECE Senior Design Project: IoT integration on the garment is a missing link toward allowing user-informed decisions on the state of their garment and their health. In this effort, a Senior Design team in the PIÃƒÂ¢Ã¢â€šÂ¬Ã¢â€žÂ¢s Engineering Design course will lead an effort to use embedded sensor technology to provide an estimated use lifetime of a garment. This effort will be in conjunction with Tom Snyder and an IAB member company 5) E-textiles Multi-disciplinary Course Development: Materials, Concepts and Design: In Spring 2014, the PI developed a new course which provides students the ability to utilize the engineering design process to create new concepts in engineering design. In the coming year, the PI aims to develop this course so as to become a multi-disciplinary opportunity for ASSIST students at NC State and at partner institutions. In addition to aforementioned research projects, our team will lead the development of the ÃƒÂ¢Ã¢â€šÂ¬Ã‹Å“Health and Environment Tracker TestbedÃƒÂ¢Ã¢â€šÂ¬Ã¢â€žÂ¢ and support on-body integration of the ÃƒÂ¢Ã¢â€šÂ¬Ã‹Å“Self-Powered and Adaptive Low Power Platform TestbedÃƒÂ¢Ã¢â€šÂ¬Ã¢â€žÂ¢.

The goal of this work is to develop a strategic process to aid in the advancement of electronic textile systems for the Department of Defense. This process will evolve e-textile solutions to DoD soldier challenges through domestic supply chain risk assessment, the identification of a standard connector system, and a modular e-textile prototype platform.

The PIÃƒÂ¢Ã¢â€šÂ¬Ã¢â€žÂ¢s are to produce CNT arrays and diamond arrays for the potential use in contact free current transfer for homopolar motors. The goal is to provide samples of both type of arrays for testing for their field emission properties. When a suitable growth configuration is established, the NC State team will work to produce electrodes in the shapes required by AML and Eagle Power for their generators.

Glaucoma is the leading cause of irreversible blindness in the world. The number of people with primary open angle glaucoma (POAG) is expected to exceed 100 million by 2040. The first-line therapy for glaucoma treatment is patient-administered hypotensive medication delivered topically via an eye drop to reduce intraocular pressure. However, patient compliance with glaucoma drop therapy is a persistent and well-known problem without a viable solution. Studies have consistently shown the extent of the problem: nearly 50% of individuals discontinue topical ocular hypotensive therapy entirely within six months of their first prescription; of those that persist beyond six months, only 37% continue the therapy after three years; and only 10% of those prescribed glaucoma drops are persistent (without gaps) over the first year. This widespread failure to adhere dramatically reduces the effectiveness of eye drops in reducing intraocular pressure and delaying the progression of glaucoma. The prevalence of glaucoma and the magnitude of the adherence issue has led to the development of numerous alternative treatment therapies, including implantable slow-release drugs and minimally-invasive glaucoma surgery (MIGS). Likewise, technological solutions of varying complexity for tracking glaucoma drop adherence have been proposed by several groups. Retinal CareÃƒÂ¢Ã¢â€šÂ¬Ã¢â€žÂ¢s proposed solution is fundamentally different. The tool proposed here is a relatively straightforward, inexpensive combination of sensors designed to provide crucial feedback to patients, providers, and payers on the way a patient interacts with an eye drop applicator. This interaction, which includes both tactile and motion data via a force-sensitive resistor (FSR) and an accelerometer, can be leveraged to actively monitor drop adherence and drop administration mechanics. More importantly, that data can be used to provide decision support on how and when to intervene with the patient, how and when to incentivize, how and when to educate (on correct drop administration, for example), and, crucially, when to forego drop therapy entirely and transition to something less dependent on patient compliance such as minimally-invasive glaucoma surgery (MIGS) or an implanted slow-release drug formulation. Retinal Care approaches eye care, and health care in general, more holistically than traditional companies; recognizing the behavioral and psychosocial factors that are a root cause of blindness from manageable diseases like glaucoma, diabetic retinopathy, and age-related macular degeneration. While Retinal Care employs cutting-edge technology such as deep learning, novel electroretinography tools, and the device proposed here, we understand and work actively toward implementing technology in a way that translates directly to improved quality of life for our patients by managing the entire care path. The ability to track glaucoma adherence alone, for example, does nothing to reduce blindness. The technology proposed here, while novel in design, is not intended primarily as an eye drop tracking tool, though we expect it will accomplish that sub-goal with greater effectiveness and at less cost than any product on the market or in development. Instead, it is designed explicitly to reduce blindness by providing Retinal Care the crucial data needed to tailor our interaction and intervention strategies to the individual patient; to maximize patient engagement in their glaucoma care through a combination of incentivization, education, tailored communications, and interaction with trained care coordinators.

The objective of this project is to explore layered conductive structures using ink jet printing and to investigate toward manufacturing of simple electronic components. The scope of the investigation would include: ÃƒÂ¢Ã¢â€šÂ¬Ã‚Â¢ The synthesis of fluid chemistries suitable for ink-jetting and their subsequent processing. ÃƒÂ¢Ã¢â€šÂ¬Ã‚Â¢ Lab scale validation of multi-layered ink-jet printed metal/dielectric structures on flexible substrates. ÃƒÂ¢Ã¢â€šÂ¬Ã‚Â¢ Detailed measurement of the multi-layered interface structure through processing (printing to annealing) the subsequent influence on capacitor device performance. ÃƒÂ¢Ã¢â€šÂ¬Ã‚Â¢ Techno-economic analysis of the ink-jet printing of capacitor designs that details the benefits and challenges relating device performance characteristics to scale-up processing (manufacturing speed, material usage, and device pattern design).

The primary objective for this project is to establish transition pathways for ASSIST technologies to be integrated into ASSIST member companyÃƒÂ¢Ã¢â€šÂ¬Ã¢â€žÂ¢s potential product or service space, specifically as it relates to textile electronics. As such, an outcome of this project will be the initiation of a living document that includes a technology roadmap cross-sectioned with industry product roadmaps. Through customer discovery with internal ASSIST industry stakeholders, external industry stakeholders and ASSIST researchers, our team will identify strategic potential product directions to perform an analysis that, 1) evaluates timeline and technology risks with potential mitigation strategies, 2) identifies key technology/supply chain gaps areas and propose partnerships for resolving these gaps, 3) provides a prioritization of future technology related ASSIST activities 4) determines product specifications and costing estimates

Working dogs play an integral role in the day to day operations of both military soldiers and law enforcement officers worldwide. All canine handlers and trainers use protective bite sleeves for engagement and apprehension training. However, the canine bite sleeves on the market today fail to measure the bite force of the working dog. The result is that trainers must rely on years of training experience to subjectively evaluate their canines which may result in ineffective training, canine/handler injury or unsafe environments during operations. The development of the canine bite force sleeve would help provide an objective measurement tool for trainers to more thoroughly understand canine bite dynamics. The objective of the project is to re-design a commercial bite sleeve by incorporating electronic (or other) pressure sensors within the sleeve that accurately measures, records, and displays bite force data in real time. Canine bite profile includes overall bite pressure, mapping the bite print and duration of a bite.

This proposal supports the fabrication and testing of an alcohol monitor wrist watch. This wrist worn device will measure transdermal alcohol with data logging, LCD readout of key parameters, measurement of key physiological parameters. NC State activity for this project will be toward technical support/consulting for design and fabrication of the Phase II board and devices. Our team will conduct non-human validation testing of the wearable device, as well as conduct conduct trials on a set of age appropriate test subjects.