This is What Science Looks Like at NC State: Mira Abed

Editor’s Note: This post was written by Mira Abed, a Ph.D. student in NC State’s Department of Textile Engineering, Chemistry and Science. The post is an entry in an ongoing series that we hope will highlight the diversity of researchers in science, technology, engineering and mathematics.

If you had told me ten years ago that I’d be a Ph.D. student studying solar energy technologies, I would have laughed in your face. 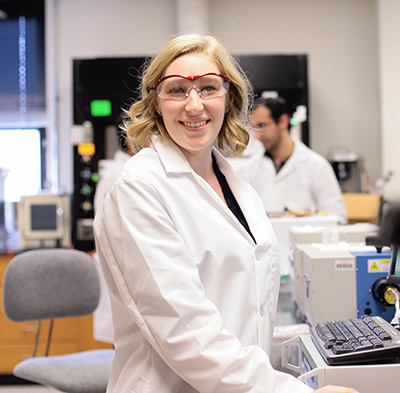 Abed working in the photovoltaics lab.

Ten years ago, a high school senior, I had just enrolled in a fashion design program. My back-up plan was to become an interior designer or a graphic designer – or maybe a chef, if I was feeling frisky.

You may think that the research I’m doing now has nothing to do with any of my high school ambitions – but you’d be wrong. The link between all of these interests and my own research in solar energy is simple: creativity. I’ve always had a pretty strong creative streak. From puzzles and problem solving to crafting and cooking, I love letting my imagination run wild and then doing something with it.

I think the first thing that attracted me to chemistry was the way it fed my curiosity. So many of the seemingly mundane principles I learned in high school seemed so awesome once I realized how they can explain the world around me. I remember sitting in class during my first semester in college – the guest lecturer, David Hinks, was explaining what gives a molecule its color, and I was spellbound. That lecture on the chemistry of color is ultimately what inspired me to change my major to Polymer and Color Chemistry.

Ten years later, I’m still fascinated by color. More precisely, I am interested in the way light interacts with matter on a molecular level. We call this photochemistry. Photochemistry explains why your shirt is blue, how you sunburn, and why that old photograph is so faded you can barely make out your great-grandmother’s face anymore. Cool, right? But photochemistry can do more than just explain light-matter interactions – it can help us exploit those interactions to do important things like converting sunlight into electricity. 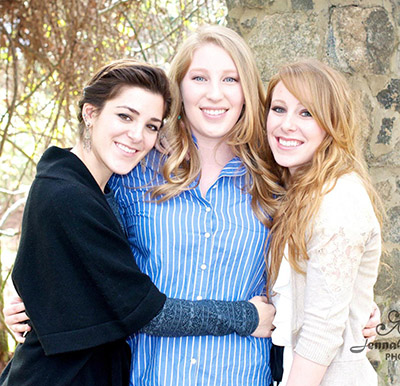 Abed with her sisters, Erica (left) and Sasha (right). Photo courtesy of Abed.

Right now, I’m working on a technology called dye-sensitized solar cells (DSSCs). DSSCs work by using a dye to absorb light, and then capturing excited electrons from those dye molecules in an electrical circuit. This is a widely-researched technology, but even with all the work that has been done there are several problems – but that’s okay, because I love problem-solving!

Some of the dyes that are best for DSSCs contain a rare and expensive metal called ruthenium. It’s rarer than gold and platinum; more in the osmium and tellurium ballpark (don’t worry if you didn’t notice those at the bottom of your periodic table). While ruthenium might make some good solar cells, it is cheaper and more sustainable to use more abundant metals, or even metal-free dyes.

Substituting another metal for ruthenium is not as easy as it may sound. Ruthenium has some pretty cool photochemical properties that make it a really good candidate for DSSCs, so any dye that can replace a ruthenium dye has to make up for that loss in other ways. Along with some other researchers around the world, I’m trying to make solar cells with cheaper metals that can compete with their ruthenium-based cousins.

This is what I use my creativity for now. Instead of designing the latest fashions, I’m designing new dyes. Instead of spending my days drowning in colorful fabrics, I’m juggling colorful (and sometimes stinky) solutions. My hope is that my ideas can help sustain our future world, and that all of us who work in renewable energy can see our work implemented for the common good.

A new robot at the Zeis Textiles Extension is producing not only customizable socks but also valuable learning experiences for students.

Introducing the 2025 Class of Centennial Scholars

Members of the newest class of Centennial Scholars share why they're pursuing a degree in textiles and their goals for their time at Wilson College.