An invention from NC State textiles researchers could solve a knotty problem in weaving plants: stopping looms to tie in new threads when yarn runs out.

Researchers Abdel-Fattah M. Seyam and William Oxenham have filed a U.S. patent application for their nonstop tying-in process. Their innovations could boost textile plant efficiency by reducing the time needed to replenish warp threads on a loom.

“This work could be a game-changer,” says Dave Hughston, director of continuous improvement for P&A Industrial Fabrications in Roxboro, which has agreed to hold full-scale trials in its plant.

The company, which employs about 45 workers, dedicates itself to lean manufacturing – eliminating steps in its production process that don’t add value. 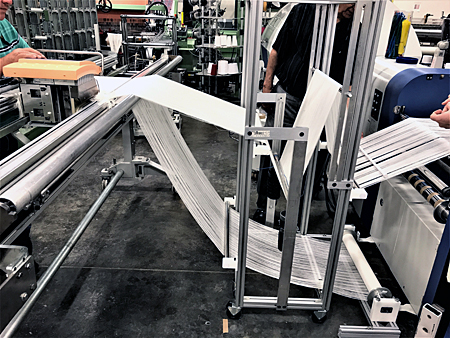 Nonstop tying-in equipment reduces the time needed to replenish warp threads on a loom. The process involves a tying-in machine (left), an accumulator (center) and the weaving machine (right).

“We have about 40 looms, and the longest downtime we have comes during the tying-in process, when yarn runs out on the beam and we have stop the loom to tie in new threads,” Hughston explains. “In our case, that involves using a machine to tie 6,400 knots. Depending on the size of the beam, that means four to eight hours of downtime. Cutting that downtime to one to two hours would be very beneficial.”

NC State’s research, funded with a grant of $574,000 from the Walmart U.S. Manufacturing Innovation Fund, is part of a five-year effort to improve competitiveness and create jobs.

“We estimate that nonstop tying-in could result in a 4 to 6 percent increase in weaving process efficiency,” says Seyam, Charles A. Cannon Professor of Textiles and Alumni Distinguished Graduate Professor in the College of Textiles.

In spite of improvements in yarn quality and high-speed weaving machines, manufacturers haven’t been able to solve the problem of long stops in production to replenish the warp sheet.

“Textile looms have been around for 3,000 to 4,000 years, and weavers have wished for hundreds of years for a solution to this issue,” says P&A’s Hughston.

NC State researchers have tested a prototype of a new accumulator and tail beam support in the Weaving Lab on campus. The next step is finding a machine manufacturer to build full-scale versions, says Oxenham, the Abel C. Lineberger Professor in the College of Textiles.

After that, full-scale trials can take place at P&A, a frequent corporate partner that welcomed two NC State industrial engineering students for assignments this year.

“We always enjoy the cooperation between us and NC State,” Hughston says. “The combination of the Walmart grant, NC State textile expertise and teaming up with a machine manufacturer to actually make this work is exciting.”

A Myriad of Opportunities

There is more than one way to NC State Wilson College of Textiles. Every semester we welcome transfer students and a few are sharing their story and the vast opportunities they have had as a transfer student.

Yarns Coated with Enzymes Can Act as Filters

NC State researchers showed they could attach enzymes to textiles in a proof-of-concept study. They want to use this technology to develop chemical filters, including for carbon capture.