With more than 30 years of leadership in textile fabrication and the development of life-saving medical devices, Brian McMurray is a titan within the global textile industry. In addition to owning and operating two North Carolinian textile-based companies, he managed to find time to lead the creation of 15 patents.

While it’s clear that McMurray has thrived within his professional career, he takes the most pride in his family and his strong connection to his alma mater: the Wilson College of Textiles at NC State. Since graduating in 1986 with a bachelor’s degree in textile technology, he has proudly given his time, talent and treasure to the university that helped shape his success.

“The Wilson College of Textiles taught me a multidisciplinary approach to learning new things,” McMurray emphasizes. “In turn, I’ve been able to quickly adapt within an industry that is constantly changing and evolving. I appreciate my time at the college and how it helped me grow academically and create networks that are still vital today.”

On Nov. 3, McMurray was named an esteemed recipient of the 2022 Distinguished Alumni Award in recognition of the ways he’s enriched the university’s history and increased the value of an NC State degree. This honor took him entirely by surprise.

“It was an emotional experience for me,” he shares, clearly moved. “I’ve never desired recognition for my work, so this acknowledgment means a great deal to me. I appreciate my peers nominating me for this honor.”

He received the prestigious award at the Evening of Stars Gala, which dates back to the early 1940s when the NC State Alumni Association began recognizing noteworthy graduates.

Brian McMurray is a remarkably impactful Wilson College alumnus. Not only is he a role model for our students interested in textile entrepreneurship and developing high-performance textiles, but he also supports NC State in a myriad of thoughtful ways.

Dean of the Wilson College of Textiles

Dean Hinks went on to say, “Brian continues to pay it forward, from serving as president of the Wolfpack Club to being a director on the North Carolina Textile Foundation Board. He also joined his wife, Konni, as a founding supporter of our Textile Pioneer Scholarship program. We will always be so grateful to Brian’s extraordinary service in making NC State the best it can be.”

Discovering a love for textiles and stepping into leadership

Born in Summit, New Jersey and raised in Aberdeen, North Carolina, McMurray was introduced to NC State and the Wolfpack in 1978 when he first watched them take on the UNC-Chapel Hill men’s basketball team. His eyes were glued to his family’s television screen, transfixed.

“I’ve always pulled for the underdog,” McMurray says. “I couldn’t help but root for the Wolfpack every time I saw them on the court.”

It wasn’t until McMurray’s father told him that the Wilson College of Textiles was the best institution in the world for textiles that he even considered becoming an NC State student. When a recruiter later visited his high school chemistry class to speak about the college, it felt like fate.

“As a high schooler, I worked in my father’s textile plant,” he explains. “That’s when my love for textiles began. After learning more about the Wilson College, I knew it would be the perfect place to continue my education.”

With multiple job offers, McMurray weighed his options carefully and decided to begin his career as a textile engineer at General Motors in Detroit, Michigan. It was during his first day of work — at his orientation to be exact — that McMurray would meet his wife, Konni.

She was by his side when tragedy struck in 1987, and McMurray lost his father. That same year, at 23, McMurray made the difficult decision to become president of his father’s company, McMurray Fabrics, a leader in manufacturing warp-knit fabrics.

“It was incredibly daunting to jump into that leadership role at such a young age,” he says. “I was thrown into the deep end.”

With his natural-born leadership skills, McMurray quickly went from treading water to swimming laps confidently. As president, he and his team expanded the company from one manufacturing plant in Aberdeen, North Carolina, to five plants across the United States and the Dominican Republic.

His experience at McMurray Fabrics led him to add another impressive title to his resume in 2001: founder and CEO. After recognizing the specific need for precision textiles in implantable medical devices, McMurray launched ATEX Technologies. Today, his company serves as the world’s most comprehensive resource for designing, developing and manufacturing textiles for the implantable medical industry.

The same multidisciplinary approach to learning that he gleaned from the Wilson College as a student is put into practice daily while he balances two demanding leadership roles: president of McMurray Fabrics and president and CEO of ATEX Technologies.

You can see McMurray’s pride for his alma mater in the offices at both of his companies. Each space is overflowing with keepsakes, pennants and photos from NC State and the Wilson College of Textiles; the amount of Wolfpack red in his offices is visible from several feet away.

That love for NC State inspired McMurray, in 1990, to make his first philanthropic gift to the Alumni Association. Since then, his support has ballooned to significantly impact student scholarships in the Wilson College of Textiles and Wolfpack Athletics. It’s an area that is incredibly close to his heart.

During my third year as a textiles student, I was approached — unsolicited — and awarded a merit-based scholarship by the North Carolina Textile Foundation. As a student working to pay for my education, that scholarship meant a lot to me. I want to repay that support by helping outstanding NC State students.

One significant way that McMurray and his wife have aided students in the college is by serving as founding benefactors of the Textile Pioneer Scholarship program. Their generous gift in 2020, which established the McMurray Family Textile Pioneer Scholarship Endowment, expanded the college’s recruitment efforts in North Carolina’s non-metropolitan areas and with first-generation university attendees.

“This scholarship program aligns perfectly with NC State’s land-grant mission and our values,” Konni says. “We’re proud to provide access to students who never thought NC State was within reach. These talented students face so many barriers when it comes to higher education. We want to remove as many obstacles as possible from their paths.”

Four of the five inaugural Textile Pioneer scholars are the first in their families to attend college. One of those students, Jenna Grace Bowker, says, “Being awarded this scholarship lets me focus on my future without a huge financial roadblock.”

She credits the Textile Pioneer Scholarship, the McMurray family and the Wilson College of Textiles for opening doors that she would have never been able to locate on her own. 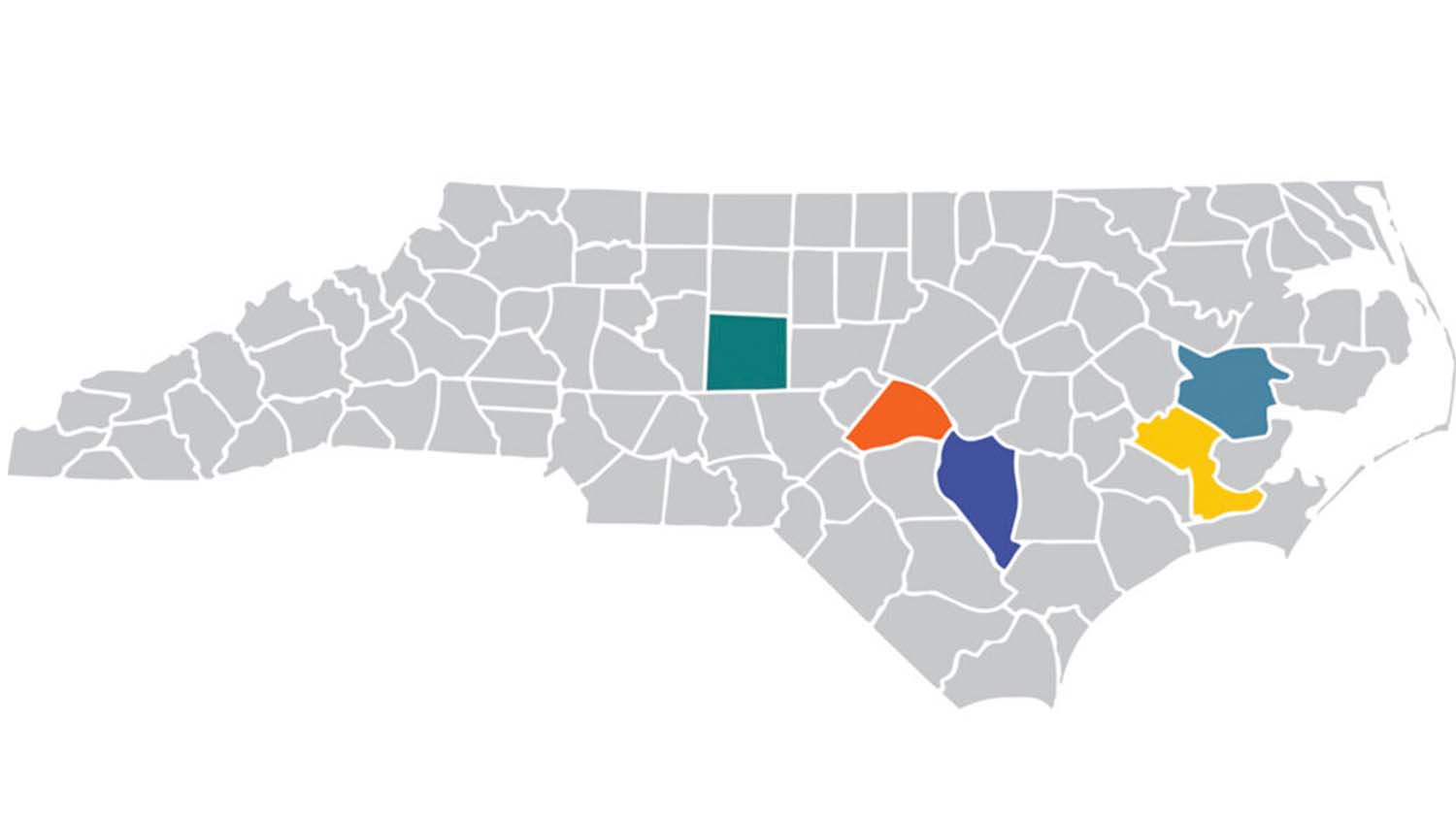 In 2020, the Wilson College of Textiles launched its first need-based scholarship to help recruit next-generation talent to NC State.

“Brian’s tireless commitment to NC State, the Wilson College of Textiles and the broader textile community has shown that he embodies the university’s Think and Do mantra,” says Michael Ward, executive director of the North Carolina Textile Foundation (NCTF).

“He has also demonstrated all areas of our NCTF mission in his lifelong support of our college. He has engaged with other alumni and donors, brought countless partnerships to our university, and he and Konni have given generously for many years. I’m proud to consider them both close friends.”

The couple’s philanthropy has also impacted the Centennial Scholarship program, which provides more than $20,000 to students each year for tuition assistance and enrichment funding for extracurricular activities.

“We think of this support as a gift, of course, but also as an investment in the future of our nation’s textile workforce,” McMurray says. “Students in the Wilson College of Textiles are receiving an outstanding education and are the most competitive future applicants for my companies and other organizations in our industry.”

Supporting his Pack through tireless service

McMurray might not consider himself a “cheerleader” for the university, but he has a special knack for helping others fall in love with NC State.

During his time with the Wolfpack Club, McMurray is most proud of his work in helping to name the James T. Valvano Arena at the William Neal Reynolds Coliseum. The facility honors the legendary former men’s basketball coach McMurray has looked up to for years. His and Konni’s dedication to Wolfpack Athletics even earned them the honor of being named “Guardian Wolves.” This distinction was created for those who contributed significantly to help NC State Athletics weather the storm during the COVID-19 crisis.

“We will forever be grateful to the Guardian Wolves for their generosity and support during a time of critical need for NC State Athletics,” Boo Corrigan, director of NC State athletics, said during his 2021 announcement. “Because of their support, we were able to navigate an incredibly challenging year and put our focus toward our future and advancing NC State.”

The couple’s commitment to service extends beyond the walls of NC State. In Moore County, McMurray has been a long-time board member of First Health of the Carolinas and is a vital advisor to the O’Neal School, where Konni serves on the board of directors. They are both strong supporters of the Boys and Girls Club of the Sandhills, Sandhills Community College and the Humane Society. In 2017, Konni was named the Moore County Community Foundation’s Woman of the Year in honor of her active service to the community.

“Konni and I have been married for 33 years, and we are proud to give back to NC State and our communities in meaningful ways,” McMurray says. “We hope to instill that passion for service and philanthropy in our four children and generations of our family to come.”