Lauren Durrell ’14: A Passion for Combating Waste Led to a Dream Career at Nike

As an out-of-state student from New York, Lauren Durrell ’14 considers her path to NC State a long one. While it took her away from her home, she gained lifelong friendships that have deepened her connection to the university and her college.

Durrell first learned about the Wilson College of Textiles during an academic fair on campus. She knew immediately that she had found the right fit.

“I got a late start at the college, but it was one of the best decisions I have ever made,” she says.

She split her time between serving on the university’s cheerleading team and attending textile technology classes on Centennial Campus. While she was a student, Durrell discovered her passion for fighting climate change by eliminating waste. In addition to focusing her Senior Design project on that topic, she has let her continued interest in sustainability guide her entire career.

Today, Durrell is the project manager of sustainable innovation at Nike. Learn more about her path to success in the Q&A below.

Why did you choose NC State and the Wilson College of Textiles?

I started out at NC State thinking that I would receive my undergraduate degree in business administration. Then, I went to a college fair for the Wilson College of Textiles and immediately knew I needed to change my path. I got a late start at the college but it was one of the best decisions I have ever made.

What activities were you involved in as an NC State student and how did they impact your experience?

I was a part of NC State’s coed cheerleading team, which fulfilled my need for competition. Cheerleading also fueled my love of sporting events, and the atmosphere within the Carter-Finley Stadium is still one of my best memories. Most importantly, it led to amazing friendships and a great sense of what it means to truly be a part of a team, which is something that is key to succeeding in my career.

Who influenced you most during your time at the Wilson College of Textiles? And why or how?

I have to say my Senior Design group and the company we worked alongside. My greatest accomplishments while at Nike have been built off of the work we did as a collaborative team of eager students.

Joseph Hage ’14, ’15 and Josh Knippel ’14 were awesome to work with, and I have had the privilege of watching the company, now known as Osomtex, grow into an entirely new business from the ground up. The company upcycles existing clothing into spun yarns that can be used in apparel, footwear and home goods. 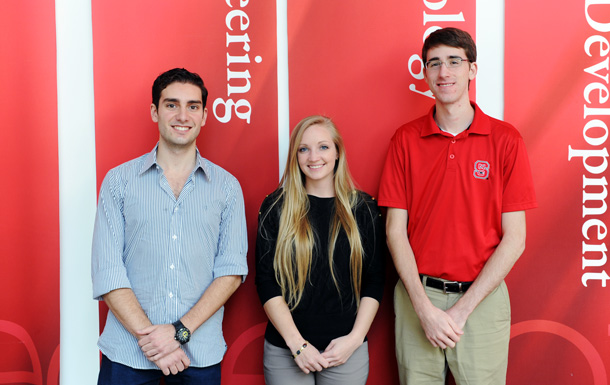 Graduating seniors within the Textile Engineering and Textile Technology programs work as a team alongside industry partners, such as The North Face, Under Armour and the United States Army, to explore the entire design process.

Lauren Durrell ’14 credits the Senior Design program with putting her on the path to success.

How did your education at the Wilson College of Textiles prepare you for what you are doing today?

There is no better place to get the best appreciation for and education in science, engineering and design than the Wilson College of Textiles. The resources around textile creation are truly amazing.

My entire career has revolved around initiatives to combat waste and climate change through the fashion industry. I am continuously learning and evolving my points of view as research progresses.

One of my recent career highlights is my involvement with the Space Hippie shoe by Nike, which transforms trash into something new and beautiful.

What advice do you have for current Wilson College of Textiles students?

Spend as much time as you can using the resources at the college to create textiles. The best education involves taking action, facing challenges and working through those challenges. I can’t remember who is responsible for the quote, but “failure and rejection really are just redirection.”